Join the Jackson Hole Community Band as we perform with the majestic Tetons as a backdrop. We will be playing movie and patriotic favorites by John Philip Sousa, John Williams and more.

Look at all the stars. You look up and you think, “God made all this and He remembered to make a little speck like me.” It’s kind of flattering, really. ~ Morgan Earp, Tombstone 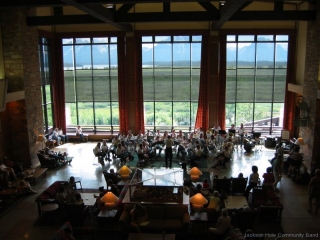