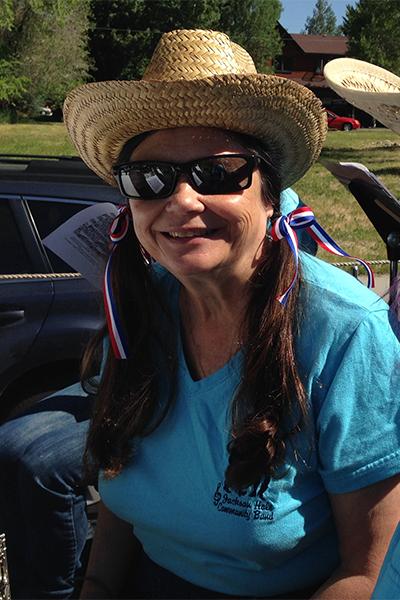 Nancy started playing the flute in middle school and continued through the first 2 years of high school.  Even though she wasn't in an organized group, she obtained a new flute and played it on occasion just for fun. Then when the Jackson Hole Community Band was formed for the Wyoming Centennial, Nancy and Tom became involved with its organization and rehearsals (Nancy on flute and Tom on tuba).

Daughter Stephanie was 2 years old at the time the band was formed. The band rehearsed in a variety of venues, and Stephanie would occupy herself in back of the band with what toys she brought along. 30 years later, she could be found still at band rehearsals, playing trumpet. Stephanie is currently a practicing doctor at a two veterinarian clinic in Bozeman, Montana and drives down to participate in the band's concerts. Nancy’s son Peter attended rehearsals in much the same way a few years after his sister. He became a familiar sight on the back of the band trailer near the percussionists so that he could jump off and chase down sheets of music that blew off the stands. By middle school, he studied percussion, became part of the school bands, and he often played with the Jackson Hole Community band until college. At those times, it was all four of the Ninnemann family playing in performances.